In late August, a widely-reported study in the medical journal The Lancet, concluded that alcohol use generally increases the risk of mortality and that “the level of consumption that minimizes health loss is zero.” When the study hit the newspapers, the headlines focused on the finding that any alcohol consumption at all is bad for health. This new conclusion appears to be at odds with generally-accepted beliefs that a glass or two of wine a few times a week has no negative health effects and could even be beneficial.  What does this all mean? As usual, digging deeper shows that the true meaning of the study is a little more complicated.

Analysis of the Study

Let’s start with a basic overview of the study itself. It was a “meta analysis,” which means that it looked at data from hundreds of other studies around the world that had already been completed. The researchers created complex mathematical models to correlate drinking behavior with 23 different alcohol-related health problems, and concluded that any alcohol consumption is related to some level of health risk while no alcohol consumption is not related to health risks. And from that came the headlines.

An article in the New York Times did an analysis of the study and came up with some observations of its own.

First, because this was a study of other studies, many behavioral factors other than alcohol consumption weren’t taken into account. For example, it’s possible that many of the drinkers were also smokers or it’s possible that people who drink more in some countries are also poorer and don’t maintain a good level of nutrition or exercise.

Second, the level of risk determined by the study is not very high. Compared to study participants who drink no alcohol, only 4 people in 100,000 people who consume one drink a day may have a health problem caused by the drinking.

Third, not everyone experiences risk in the same way. Some people are predisposed to diabetes or heart conditions, but for people who are not there is evidence that light drinking actually reduces the risk of developing those diseases.
​
That said, no one would argue that alcohol is overall a good thing for health, and no reputable physician would recommend that a non-drinking patient start drinking. However, the results of this study alone don’t mean that a light to moderate drinker should stop altogether. As with most things, moderation and good judgment should rule. For example, eating ten pieces of cake every day would also cause health issues and eating zero pieces would eliminate all of those fat and sugar-related risks, but that doesn’t mean everyone should completely stop eating cake.
Current Thinking About Alcohol Consumption

﻿Now for the other side of the story. Too much drinking is extremely bad for health. According to the US Government, 88,000  Americans die from alcohol-related conditions annually, making alcohol the third leading preventable cause of death in the US. Alcohol causes liver disease and increases the risk of cancer of the mouth, esophagus, pharynx, larynx, liver, and breast. Excessive drinking can also negatively affect our immune systems making us more susceptible to a variety of illnesses. How much is too much? US Government dietary guidelines recommend the following:
"If alcohol is consumed, it should be in moderation—up to one drink per day for women and up to two drinks per day for men—and only by adults of legal drinking age. For those who choose to drink, moderate alcohol consumption can be incorporated into the calorie limits of most healthy eating patterns. The Dietary Guidelines does not recommend that individuals who do not drink alcohol start drinking for any reason."
And in this context, a “drink” may be less than you think. In the United States, one "standard" drink contains roughly 14 grams of pure alcohol, which is found in:

And it’s never a bad idea to take an objective look at how much we drink. According to the National Institute on Alcohol Abuse and Alcoholism, “there's a lot of mistaken ‘all or nothing’ thinking about alcohol use disorder. Many people assume there are two options: Either you don't have a problem with drinking, or you're a ‘total alcoholic’ whose life is falling apart. The reality is not a simple black or white, but more of a spectrum with shades of gray. An ‘alcohol use disorder’—that is, alcohol abuse or alcohol use disorder--can be mild, moderate, or severe. People with an alcohol use disorder can be highly functioning, highly compromised, or somewhere in between.”
​
Current statistics show that as much as 73% of the adult US population drinks some alcohol. If you are among them, the key is to drink responsibly and make alcohol consumption a part of an otherwise healthy lifestyle. Below you’ll find some terrific resources to help you understand what responsible drinking means for you. 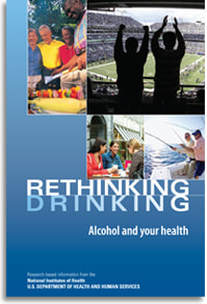 General Research-Based Information
The National Institute on Alcohol Abuse and Alcoholism has a wide variety of information about the
effect of alcohol on the body and Alcohol Use Disorders.

Evaluate and Address Your Own Drinking
The federal government’s “Rethinking Drinking” site has multiple online tools that allow you to assess
your level of drinking and, if you choose, to develop plans and strategies to reduce your alcohol
consumption.

Alcohol and Public Health
The Centers for Disease Control has lots of information about the societal cost of alcohol consumption
​and how it affects public health.
Download Rethinking Drinking,
published by the National Institute
on Alcohol Abuse and Alcoholism